Finally! Proof that Jason is still alive and has hands!

Welcome back to the 'space!

Yep, I'm back, but quite as busy with non-comic matters of real life. There's a lot of things to be doin' for Seriously Suzy, such as creating more comics (otherwise the cache runs out next month), making the gallery page, cast page, etc. In the interim, somehow I managed to slim down the SunConn website (introducing some of the rescanned comics.) The Suzy site additions will have to wait since I'm leaving for Charlotte on a school trip Thursday (3/11).

Whaddya think of the comic's story so far? We see how Jeana's life became somewhat a mess... but the flashback ends so we'll see how things turn out in the present. I shall return next week, scrambling to fill the comic cache...

- Jason
Seriously Suzy - a slice of Southern life
Don't plan to be 'spotted. I'm already 'spaced as it is...
Top

I'm so glad you're back on the comic making again. It's well worth the wait - the story's pretty cool so far on Jenna - nice backstory regarding how she met TJ and wore sunglasses (I'm wondering what TJ's full name was).

Can't wait to see what goes on with Suzy's life later. Cheers!
Top

Ah yes, it feels good to be back in the webcomic biz! I'm glad you like the comic so far, especially the backstory on Jeana's past. The backstory was originally planned as a separate part to be used later if I was running behind on the comic (if it was forced to premiere later than March) in which case Seriously Suzy would've begun with Chauncey and Suzy at the dance. (btw, I've no idea of TJ's full name...)

To all my readers... I'm working on some more comics, including the Online Comics Day 2004 entry. I've also begun promoting Seriously Suzy, first with an ad in the new Newsbox: 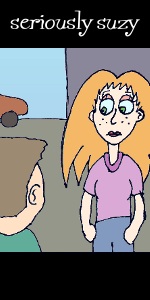 I've made some slight changes to the site's front page, adding the new Newsbox and enabling scrolling of the news and updates section. I'm on the lookout for any additions/enhancements to the website; if anyone has any suggestions please let me know! You can also suggest some links if you like (I'm still working on the links page as well as the other unfinished pages.)