The common room of the Wendigo floor, or house as it's been named since the recent rise of a certain series of book, is an odd collection of knickknacks and toys. A large flag hangs over the back of the largest couch in the group. The snarling stylized head of a Wendigo the houses symbol. Overstuffed chairs are scattered about in a loose semicircle, with beanbags and oversized pillows filling the gaps. The carpet is buried somewhere under the scraps of rugs and fabric piled on the floor, but brave students have been lost in search of it.

The walls about the room are covered in shelves crammed full of books mostly fantasy, sci fi but a few with titles like "Lusty Knights" and "Grin and Bare It". The board games stuffed on the bottom shelves show heavy use as well, seemingly well covered by spots of beverages from the large bar.

Sitting in the only leather recliner in the room is Talbon, he's artfully draped over one edge and looks upside down at Fosa who chatting with him, something about 'fresh meat' the two quiet as the first people enter the room, Talbon and Fosa look with two pairs of predatory eyes at the newest arrivals. 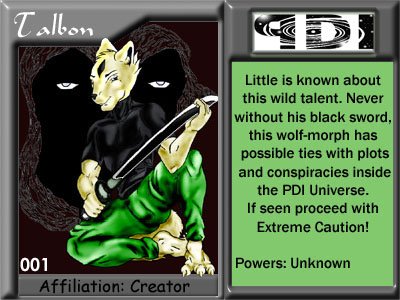 Aeire opened the door and poked her head inside, taking note of the general dishevledness of the area and dragging a rather large bag with her, which seems to be brimming over with pens, pencils, sketchbooks, ect. She paused at the open stares and blinked, then giggled out of sheer nervousness.

"Um...where do I put my stuff?" she queried, wondering where and how room arrangements were going to be assigned, and if she'd be stuck with a roommate or not.
Queen of Wands - Wanna taste of religion? Lick a witch.
Top

"Pick a spot and toss it, we find the less you're attached to material things. You know, books, tests, pencil and most of all clothes."

Fosa's ears perk and chimes in her support, "Yeah, clothes really impend the learning process. It's a proven medical fact."

Talbon smiles his agreement before looking back to Aeire. "Indeed, you'll find that Wendigo house is full of interesting facts. So grab a seat, grab a drink but ask before you grab anyone and we'll return the favor. We'll wait for a few more of floormates to boil in and then I'll assign rooms using the secret tools of the Wendigo." For the last Talbon's face grows very serious and his voice deepens to grave tone, which is only broken by Fosa's knowing giggle behind him.
Artist of PDI

Saski edges into the lobby, with his posessions, among which a rather battered guitar case can be seen. I say "Well, where should I put my stuff, and am I gonna have to share a room with anyone??" A small 'pop' is heard and a tiny winged kitten appears on my shoulder, I sigh and say "Oh, and I hope that pets are allowed in the dorms."

Talbon waves over to Saski, missing the very thorough once over Fosa the newest arrival behind his back. "Hello again Saski and welcome, just throw your stuff somewhere. We'll sort it all out in the end." He blinks at the pet's trick, already calculating the uses for that little creature. "Nice! While pets aren't encouraged I say if they can pilfer the Dean's keys while he's sleeping let 'em in."
Artist of PDI

I reply to Talbons' sally by saying "well, as far as I can tell, Pyx here hasn't found a location that she can't find me in. And, true to being a cat, she does what she wants, when she wants to, the only reason that I can tell that she has stuck with me so long is that I have a rather unlimited supply of catnip and food for her." {Thought bubble: oh, man, he's gonna try to get her to do stuff.}
Top

*Sharky appears out of nowhere, having teleported in, and crashes headfirst onto the floor, rolling over to blink at the others.*

"It should all come out all right in the end?" she says, getting to her feet. "Now that is something I could get very comfortable with. Hi. Any room for a.... eh.... me?"

"Hi" a mischeivous looking rabbit says as he walks through the door and sits down.

"I thought I should come here for 2 reasons, I might be useful to the faculty (ooc see powers), and the 2nd, all the other houses look kinda stodgy. Besides, we have the cool RA." The rabbit says, hoping to suck up to the Boss-type person.

"oh yeah, my name is actually captain apathy, it's a slovak last name, and my parents were on a military kick, my brothers are named major, general, lieutenant and rear-admiral. Funny that I'm the gay one"
Top

"Well I think we all know the saying about herding cats." Talbon says to Saski and looks prepared to say more when the newest recruit drops in on them.

Totally unfazed, after all the odd is the norm at PDI, Talbon looks over to the interesting display of limbs and body that is rolling over Sharky. "Hello Sharky, everyone can get comfortable with our motto, it just takes time and patience." For some reason the wolf finds that hilarious and lets out a chuckle while nodding in response to Sharky's question. "Certainly, there is always room for one more."

"Hi" someone says, attracting Talbon's attention. Fosa is still licking her lips at Sharky. With an eager grin the wolf listens to Captain Apathy, "Wendigo house is definately not stodgy and thanks Cap'n, you'll find so long as you obey the rules and always help out the fellow Wendigo I'm pretty laid back." Again the wolf laughs after Captain Apathy's closing remarks. "I think you discovered one of the odder occurences of psychic power phenomina. Parents with psychics to be often name their children with rather... unique naming conventions."

Talbon gestures from his seat, the slightly disappointed looking Fosa breaking into a grin behind him. "Grab a seat, we'll be starting soon."
Artist of PDI

I sit carefully down and unlimber my guitar, and start noodling, playing a dark rendition of 'The Call of Kthulu' - Metallica, waiting to see what happens next. Anyone who listens to it closely will notice that it sounds like the rest of the band is playing along with me. I keep my eyes on Fosa, as I adapt to the 'rules' of this place.
Top

The gray feline takes a slow look around the place, nodding politely to those whose gaze meet his own, frowning for a moment at the musical rendition before finally placing it. Currently clad in plain slacks and a `Sandman` T-shirt, he looks like a fairly typical student. He settles into one of the chairs, fishing a slightly battered notebook and pencil from his bookbag.

starts chuckling to himself.. and his fur, seemingly without any obvious cause, changes color to a bright electric blue.. he looks over at Talbon, and just gives a shrug "felt like it"... as he continues to noodle on his guitar..

[ooc]and I'm back, woohoo !!! - beware, I've been on FM alot recently, so I may be a bit more nutty than before[/ooc]
Back-story, so far
Top

((OOC Talbon is focusing mostly on other stuff during the development hiatus -- hopefully we'll get the new and improved PDI-specific forum up and running and fast before our return (in a bout two weeks).))
Scott "SCIX" Maddix
Psychic Dyslexia Institute
FotM
Crooked Muse
Top

This thread is now locked. All RP threads must now continue at the new forum site, http://www.xforums.net/forums/18.shtml